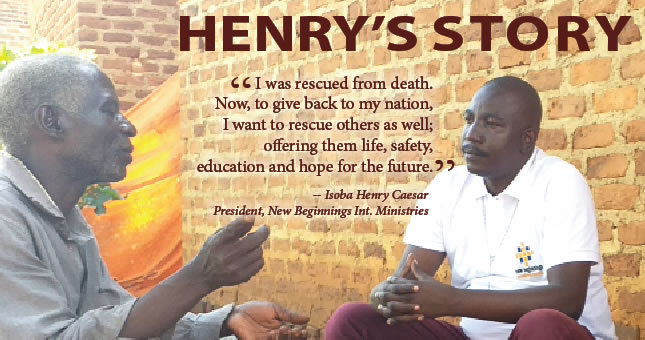 As a newborn, Isoba Henry was abandoned and left to die at a garbage dump. But God, it seems, had other plans. Thanks to local police, little Henry was delivered into the hands of an adoptive American couple who raised him, in Uganda, as their own. His parents brought him up as a Christian, put him through school and sowed within his heart the seeds of greatness.

“I was rescued from death,” Henry explains, “and now, to give back to my nation, I want to rescue others as well; offering them life, safety, education and hope for the future.”

And this is precisely what he has done. Since 2009, when he founded New Beginnings, Henry and his team of volunteers have been working to save lives and build futures. Recently, an area police commander heard about the work Henry and his team had done to save the life of an orphaned baby (who had nearly died in a fire). The police commander said, “If we had more others, dedicated and faithful people like those of New Beginnings, our entire country would be safe.” After saying this, he prayed that God would bless New Beginnings with an endless stream of support so that more lives would be saved and more bright futures would be created.

On April 15, Henry, tired from much work and much walking to serve the needs of his family and the needs of the women of Ruth House (our women’s shelter) was invited to attend the farewell party for a local (sub-country) leader. As tired as he was, at the urging of his wife Joyce, Henry walked the 3-kilometers to attend. It was good he did. At the farewell event, Henry was presented with a Certificate of Recognition to thank him and congratulate him on his work. The local leaders told Henry, “We thank you for your effective and efficient work on behalf of our people!”

Lee John Bruno, (President, United for Life Foundation, Birmingham, Alabama, USA), endorses Henry this way. “A diamond in the rough, that’s how I describe Henry’s character. I’ve always been impressed with his faith, his devotion to serving his people and his strict code of financial accountability. Henry’s vision for his community (where all those in crisis find refuge and hope) aligned perfectly with our mission at United for Life Foundation. That is why we formed our USA partnership with New Beginnings and its mission. We know that with Henry at the helm in Uganda, we are supporting his long track record of accountability, extremely fast results, and timely reporting. Every dollar donated goes toward actionable results – saving lives and building futures. We are proud to support Henry and New Beginnings because, it’s not every day you find a diamond in the rough.”

It should be noted that your gifts to New Beginnings go entirely to support the work being done in Uganda — USA Partners underwrites all of its own expenses so all your dollars go to Uganda — and, your gifts to New Beginnings do not include any support for Henry. Henry works to support himself and does not take a salary from New Beginnings. Each of us on the informal board of New Beginnings USA Partners will, from time-to-time, send Henry and his family separate donations for his personal support. Henry and Joyce have a family of three children, two boys and girl. If you would like to support Henry’s family directly, please ask how you can use funding apps (MoneyGram and Xoom) to send funds directly to Henry (outside of the New Beginnings donation portal). Gifts which go directly to Henry this way are not tax deductible.